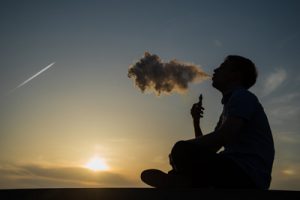 Unless you’ve been living under a rock, you may have noticed that vaping and e-cigarettes have become a kind of big deal. Long gone are the days that smoking seemed cool, indeed the opposite is true as tobacco becomes taboo and we sensibly strive for a healthy future, let’s take a look at the rise of vaping in the UK and how e-cigarettes are helping literally millions of smokers, relinquish an unhealthy habit of a lifetime and become smoke-free.

The number of smokers making the switch to e-cigarettes continues to rise as a survey by anti-smoking campaign group ASH estimate that some 3.2 million people in Britain now admit to vaping and of over half of those surveyed, said they switched to vaping after quitting tobacco – in 2012 the number of vapers in the UK stood at just 700,000.

Heralded by Public Health England as being up to 95% less harmful than smoking tobacco, e-cigarettes have the potential to enable tobacco smokers to become smoke-free. Annual campaigns such as VApril and Stoptober have enabled the message of e-cigarettes to be heard far and wide, as the voices of UK health officials and Government groups add their support to see vaping recognised as a drastically less harmful alternative to smoking cigarettes.

Slowly but surely, with the complementary addition of devices such as e-cigarettes and vaporizers, together with traditional cessation products and recommendations made by doctors and health professionals, the number of smokers in the UK continues to fall.

Where a smoke-filled pub or even office may have been a thing of the past in the UK, the nation’s collective recognition of the harm tobacco incurs, has seen our nation only bettered throughout Europe by Sweden in terms of our population’s smokers sitting at 7.4 million (14.9% of adults in 2017). NHS statistics report that this figure is down from 15.5% in 2016 and 19.8% of adults who smoked in 2011. Additionally, there was also a 2% decrease in smoking-related deaths in England in 2016, sadly representing 16% of all deaths.

While both the increase in numbers of vapers and a decrease in those that smoke is encouraging news, there is much to be done to enable our society to become a smoke-free one. From myths such as popcorn lung to nicotine is bad for you, education for smokers about the very real benefits of vaping compared to tobacco is a necessity. Due to the nature of nicotine delivery and the exponential growth of the industry and vaporizer devices alike, the expected red tape and restrictions naturally lie in wait.

Whether they are advertising limitations on what e-cigarette companies can convey as a healthy alternative to smoking or simply where in public spaces we are allowed to vape, industry ambassadors such as UKVIA, together with various government groups and health officials actively continue to campaign for vaping to be considered a viable product for cessation. If you’re serious about ditching smoking then join the millions of other UK smokers in realising your ambition to become smoke-free and let vaping help you on your way to becoming a healthy, smoke-free, brand new you.