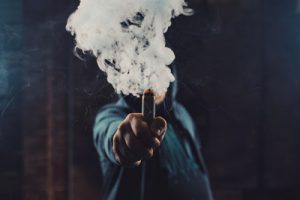 Yarns, fables, fantasies, legends, myths…whatever you call them, vaping myths are amongst them. Whether around the campfire or propped up against the bar of your local pub, for centuries stories have been told, emboldened, and inflated from one teller to the next – it’s kind of a thing that we humans do from time to time. Cornerstones of aimless conversation, tales can tend to lack the kind of substance and truth that can, instead of providing fruitful fodder for debate, can, in fact, put someone off making a potentially life-changing decision.

Due to the nature of e cigarettes and vaping (“nicotine, electricity and vapour oh my”), there are unfortunately some folk that exist staunchly set on giving vaping a bad name via the stuff of legend which may account for the reason that 44% of UK smokers believe that vaping is as bad for you as smoking. From the outlandish to the ludicrous, let’s take a look at how to make sense of vaping myths and how to stay smoke free.

Whether its e cigarettes spontaneously bursting into flames or contracting the unpleasant-sounding popcorn lung, there is, unfortunately, a multitude of curious conjectures on e cigs that cause an awful lot of misunderstanding among the many. Let’s take a quick look at some of the most popular myths;

Navigating the noise that surrounds e cigarettes can be a fairly straightforward task to undertake. In an age where information has never been more readily available, at a touch of our fingertips we can access a wealth of knowledge. But how do we know what’s fact and what’s fiction? If the story you hear sounds wild and fantastical, the likelihood it is. Trust reputable sources such as Public Health England and do some thorough research for yourself.

Vaping is 95% Less Harmful than Smoking

As we mentioned, one of the most important pieces of information to consider when it comes to whether or not you’ll continue to smoke or pursue the potentially life-changing way of vaping, comes from the knowledgeable folk at Public Health England who said in 2015 that e cigarettes are up to 95% less harmful than smoking tobacco and that vaping has the potential to help smokers quit.

While incorrect conversations may continue around you, the only way to stem the flow of false information is to be a beacon of knowledge and to have the conviction to let smokers know that vaping is a safer alternative to tobacco products. Spread the good word.

Need to contact us for whatever reason? Looking for the best e cigarette? Please use our form.

Do you want us to review your product? Get in touch with us today